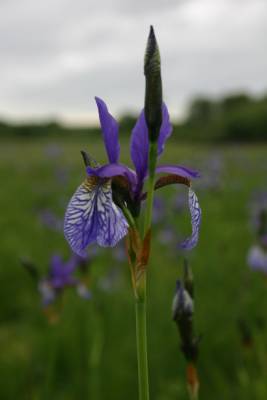 In the Sopron Basin, along the streams Ikva, Liget and Sós once there were probably extensive wet meadows and marsh meadows, accompanied by various groups of trees, along the streams thin rows of softwood forests. Part of the remaining marsh- and wet meadows along the Liget Stream and the Ikva Stream were announced in 1999 nature reserves, being valuable habitats of protected plants. The announcement was the first step on the way to conserve the natural values of the area. The Ikva Stream NR lies on 18 hectares.
The area is characterised by wet meadows dominated by the Blue Moor Grass (Seslerietum uliginosae) or the Purple Moor Grass (Succiso-Molinietum), being a rarity not only near Sopron but also Hungary- and EU-wide, as well as meadows with Foxtail Grass (Alopecuro-Arrhenatheretum) and False Oat-grass (Pastinaco-Arrhenatheretum). The areas growing over with reed or shrubs are also valuable. The higher parts of the meadow beside the Ikva Stream are characterised by red fescue (Anthyllido-Festucetum rubrae) and lime-loving upright brome (Onobrychido vicifoliae-Brometum erecti) populations. The meadows, especially colourful in spring and summer provide habitats for dozens of protected plant and animal species. Typical protected plants of the deeper lying sites are the Siberian Iris (Iris sibirica), the Western Marsh Orchid (Dactylorhiza majalis), the Blue Moor Grass (Sesleria uliginosa), the Hungarian Pea (Lathyrus pannonicus), the Marsh Gentian (Gentiana pneumonanthe), the Common Twayblade (Listera ovata) and the White Hellebore (Veratrum album), while on the elevations the Stemless Carline Thistle (Carlina acaulis) and the Fringed Gentian (Gentianella ciliata) grow. 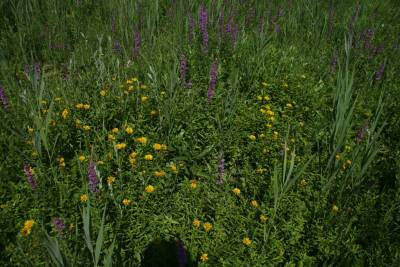 The rich flora is accompanied by a rich fauna, of course. The endangered Corncrake (Crex crex) is a regular breeding bird of the meadows where also white storks (Ciconia ciconia) and great egrets (Egretta alba) come to feed. The amphibians are represented by the European Tree Frog (Hyla arborea) and the Water Frog (Rana esculenta), the reptiles by the not so common Grass Snake (Natrix natrix). Among the butterflies the colourful, EU-wide protected Large Copper (Lycaena dispar) and the Scarce Large Blue (Maculinea teleius) can be picked out. Both meadows are inhabited by the Large Saw-tailed Bush-cricket (Polysarcus denticauda) once thought of as a pest that almost died out due to the use of chemicals and the queer European Mantis (Mantis religiosa). Conservation of their habitats is only possible with the cooperation of conservationists, local farmers, municipalities and citizens, and by sustaining the present ecological corridors and creating new ones.